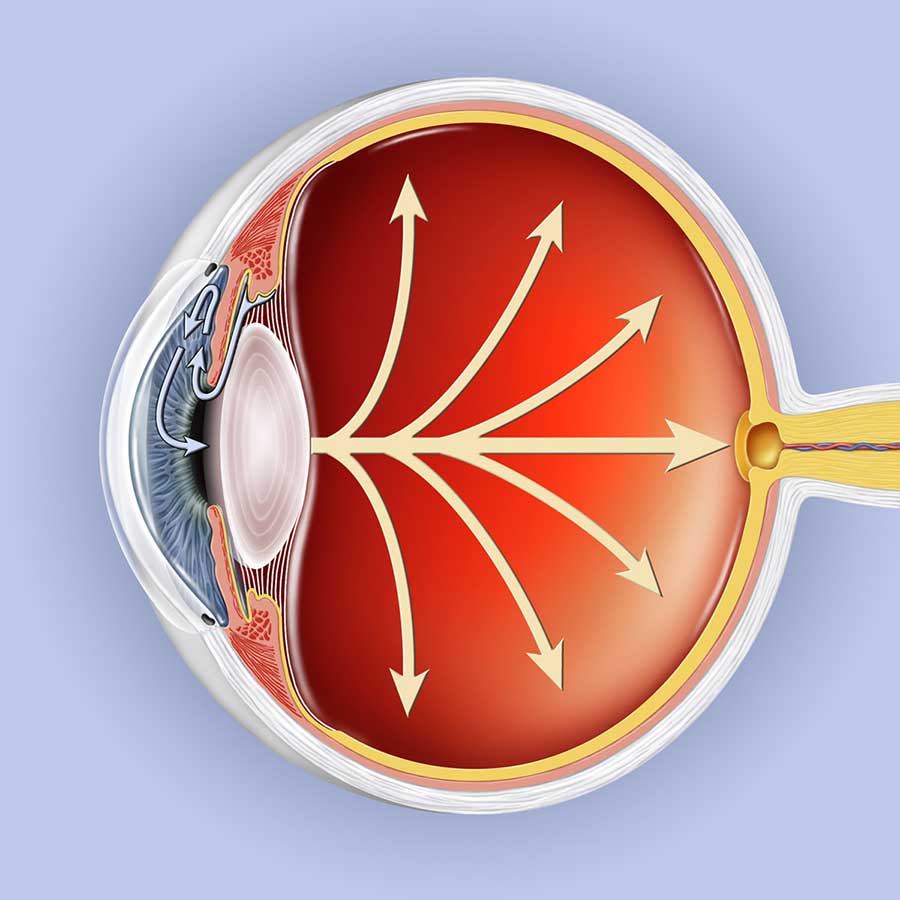 Glaucoma is the name given to a group of eye diseases in which damage occurs to the optic nerve at the back of the eye causing decreased peripheral (side) vision and, eventually, blindness. In most people, this damage is due to increased pressure inside the eye as a result of blockage of the circulation or drainage of aqueous (the clear fluid that carries oxygen, sugars, and other essential nutrients to the structures of the eye and helps to maintain the shape of the eye). In other patients, the damage may be caused by the poor blood supply to the vital optic nerve fibers, a weakness in the structure of the nerve, or a problem in the health of the nerve fibers.

Glaucoma is a significant cause of blindness in Asia. In fact, glaucoma is one of the leading causes of blindness and impaired vision among people in all parts of the world. Different populations tend to suffer from different types of glaucoma. In general, Africans and Asians are more inclined to develop glaucoma and to lose their sight than Caucasians.

Increased intraocular pressure is one cause of damage to the optic nerve, and indicates a problem with too much aqueous fluid in the eye. This may be due to the eye producing too much aqueous, the aqueous not draining properly through the outflow facility (the trabecular meshwork), or the angle formed between the cornea and the iris is narrow or closed, blocking the drainage of aqueous.

Some people have glaucoma but still have normal intraocular pressure. The cause of this type of glaucoma is thought to be related to poor blood flow to the optic nerve.

While glaucoma is more common as people age, it can occur at any age. Glaucoma tends to run in families so family history is a risk factor. Other risk factors include race, diabetes, migraines, short-sightedness (myopia), eye injuries, blood pressure, or the use of cortisone drugs (steroids).

HOW IS GLAUCOMA DETECTED?

optic nerve check with an ophthalmoscope

visual field assessment if needed – this tests the side vision, which is first affected by glaucoma

CAN GLAUCOMA BE TREATED?

Although there is no cure for glaucoma it can usually be controlled and further loss of sight prevented. Treatments include:

Eyedrops – these are the most common form of treatment and must be used regularly. Some patients may respond quickly to a drug while others may not respond as well, but the drops can be varied to best suit the patient and the type of glaucoma.

Laser (laser trabeculoplasty) – this is performed when eye drops do not stop deterioration in the field of vision. In many cases, eye drops will need to be continued after the laser. The laser does not require a hospital stay.

Surgery (trabeculectomy) – is usually performed if eye drops and laser treatment have failed to control the eye pressure. A new channel to enable the fluid to leave the eye is created. Treatment can save the remaining vision but it does not improve eyesight.

Primary open-angle glaucoma the most common form of glaucoma mainly occurs in the older age group (older than 50 years). The cause is the slowly increased pressure in the eye. The average intraocular pressure in a normal eye is 14 to 16 millimeters of mercury (mm Hg). Intraocular pressures up to 20 mm Hg may be within the normal range. A pressure of 22 mm Hg or above is considered to be suspicious and warrants further testing.

There are no symptoms associated with primary open-angle glaucoma so this disease often goes undetected. Patients have no pain and often do not realize that vision is slowly getting worse until the later stages of the disease. Treatment is necessary to halt the progression of the disease and to prevent further deterioration in vision.

Angle-closure glaucoma is most common in people of Asian descent and people who are far-sighted, and there is a tendency for this disease to be inherited, so several members of a family may have this condition. In people with a tendency to angle-closure glaucoma, the angle is narrower than average. Since the trabecular meshwork is situated in the angle formed where the cornea and the iris meet, the narrower the angle, the closer the iris is to the trabecular meshwork. The ability of aqueous fluid to pass between the iris and lens becomes decreased, causing fluid pressure to build up behind the iris, further narrowing the angle. If the pressure becomes sufficiently high, the iris is forced against the trabecular meshwork, completely blocking the drainage. Although this condition may be acute or chronic when the space becomes completely blocked, an acute angle-closure glaucoma attack results.

In an acute attack, a sudden rise in intraocular pressure can occur within a matter of hours and the eye becomes very painful. The eye becomes red, the cornea swells and clouds, and the patient may see haloes around lights and experience blurred vision. An acute attack is an emergency condition as damage to the optic nerve may occur quickly and cause permanently impaired vision.

Not all patients with angle-closure glaucoma will experience an acute attack. Instead, some may develop chronic angle-closure glaucoma. In this case, the iris gradually closes over the drain, causing no overt symptoms. When this occurs, scars slowly form between the iris and the drain and the intraocular pressure does not rise until there is a significant amount of scar tissue. An acute attack may be prevented with medication.

Normal tension glaucoma is a condition in which progressive optic nerve damage and visual field loss occurs although the intraocular pressure remains normal. This type of glaucoma is thought to be related, at least in part, to poor blood flow to the optic nerve, which leads to death of the cells which carry impulses from the retina to the brain. In addition, intraocular pressure-related damage may occur even in the high normal range, so a lower than normal intraocular pressure is often necessary to prevent further visual loss. Normal tension glaucoma is most common among people who have a history of vascular disease, are Japanese, or are female.

Pigmentary glaucoma is a type of inherited open angle glaucoma which develops more frequently in men than in women. Nearsighted patients are more typically affected. The anatomy of the eyes of these patients appears to play a key role in the development of this type of glaucoma.

Myopic (nearsighted) eyes have a concave-shaped iris which creates an unusually wide angle. This causes the pigment layer of the eye to rub on the lens, causing the iris pigment to shed into the aqueous fluid and onto neighboring structures, such as the trabecular meshwork. Pigment may plug the pores of the trabecular meshwork, reducing drainage thereby increasing the intraocular pressure.

This is a rare form of glaucoma caused by an abnormal drainage system. It can exist at birth or develop later. Parents may note that the child is sensitive to light, has enlarged and cloudy eyes, and excessive watering. Surgery is usually needed.

These glaucomas can develop as a result of other disorders of the eye such as injuries, cataracts, or eye inflammation. The use of steroids (cortisone) has a tendency to raise intraocular pressure.

For patients of glaucoma seeking further information on the disease, please contact your National Glaucoma or Ophthalmology Society.